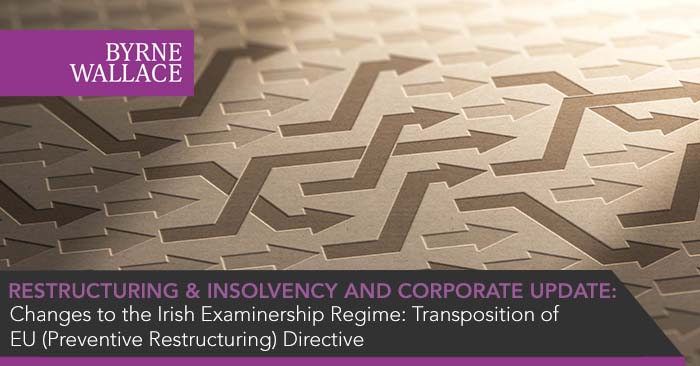 Changes have been introduced to the current Irish examinership regime with effect from 29 July 2022 when the European Union (Preventive Restructuring) Regulations 2022 (the “Regulations”) transposed into Irish Law certain mandatory articles of the European Union Preventive Restructuring Directive (EU Directive 2019/1023) (the “Directive”) that relate to corporate insolvency.

The Directive aims to ensure that “viable enterprises and entrepreneurs that are in financial difficulties have access to effective national preventive restructuring frameworks which enable them to continue operating; honest insolvent or over-indebted entrepreneurs can benefit from a full discharge of debt after a reasonable period of time, thereby allowing them a second chance; and that the effectiveness of procedures concerning restructuring, insolvency and discharge of debt is improved, in particular with a view to shortening their length”.

While Ireland’s existing examinership regime is a flexible and effective process which already complied with most of the requirements of the Directive, the Regulations address any outstanding issues and apply to any petition for court protection presented after 29 July 2022. It makes certain significant amendments to Part 10 of the Companies Act 2014 including those outlined below:

For companies that are insolvent or are likely to be insolvent (on a cash flow or balance sheet test), it requires that directors shall have regard to the interests of creditors, the need to take steps to avoid insolvency and the need to avoid “deliberate or grossly negligent conduct that threatens the viability of the business of the Company”.

Experience and Expertise of the Examiner Nominee

In cross border cases, it requires that the Examiner nominee must have sufficient experience and expertise to perform the role, having due consideration to the specific features of the case.

The IER, which is required to vouch the petition for court protection, must include an opinion as to whether an attempt to continue the whole or part of the undertaking of the relevant company meets the “best-interest-of-creditors” test and would be likely to be more advantageous to the members of that company as a whole than a winding up of the company.

Under the Directive, the ‘best-interest-of-creditors’ test is satisfied if “no dissenting creditor would be worse off under a restructuring plan than such a creditor would be if the normal ranking of liquidation priorities under national law were applied, either in the event of liquidation, whether piecemeal or by sale as a going concern, or in the event of the next-best-alternative scenario if the restructuring plan were not confirmed”.

Additionally, the Court is not permitted to confirm any scheme proposals if a creditor objects on the grounds that the above test is not met and where the Court is satisfied that the test has not been passed.

Unlike other creditors, employees are no longer prevented from seeking to commence or advance legal actions or proceedings against a company while it is under the protection of the court which means that companies in examinership will no longer be completely protected from claims during the period of court protection.

Creditors who are counterparties to ‘essential executory contracts’ with a company (i.e., contracts under which the parties still have unperformed obligations necessary for the continued operation of the business) will no longer be able to withhold performance, terminate, accelerate or otherwise modify such a contract to the detriment of such company, solely due to appointment of an Examiner or interim Examiner to the company and/or the company’s inability to pay its debts.

Certification of certain liabilities by the Examiner

Where a company is wound up within 6 months following the end of the period of court protection, then “reasonable” liabilities, and those immediately necessary for the negotiation of scheme proposals, which have been certified by the examiner (and ordinarily afforded priority in a liquidation as a result), shall not be declared void, voidable or unenforceable on the ground that the transaction is detrimental to the creditors generally.   This is the case unless there are other reasons why the transaction should be declared void, voidable or unenforceable.

Limitation on period of court protection

The total duration of the period of Court protection is now limited to 12 months, provided the Examiner has presented his or her report within the maximum period of time (currently 150 days).

Prior to the Regulations coming into force, the Court had discretion to sanction a scheme where one class of creditor impaired by the scheme proposals voted in favour of the scheme. There is a new provision which allows the Court confirm the scheme with the examiner’s agreement if:

(a) The proposals have been accepted by:

(ii) Where the foregoing classes have not voted in favour, then at least one voting class impaired by the proposals which would receive a dividend in a liquidation scenario

The Regulations transpose only the mandatory articles of the Directive.  It is proposed that the optional articles (which include a proposed extension of workers’ rights and enhanced protection for new and interim financing) be considered as part of a broader review of the examinership regime at a later date as their adoption would potentially involve some significant departures from the current examinership framework.

These changes to the Irish examinership regime are significant and should encourage company directors to proactively seek restructuring advice early, failing which there is a greater risk of personal liability.

Contract counterparties have good reason to be concerned about not being able to terminate commercial agreements with companies under the protection of the court and may want to consider collateral protections from connected third parties.

It will be interesting to see what type of grounds are raised to argue that the best-interest-of-creditors test has not been satisfied. Examiners will also need to be more mindful of creditor class composition and the requirement to formulate a scheme which will be passed by one class of creditor impaired by the proposals, bearing in mind that unsecured creditors who would not receive a dividend in a liquidation scenario will not have a vote.