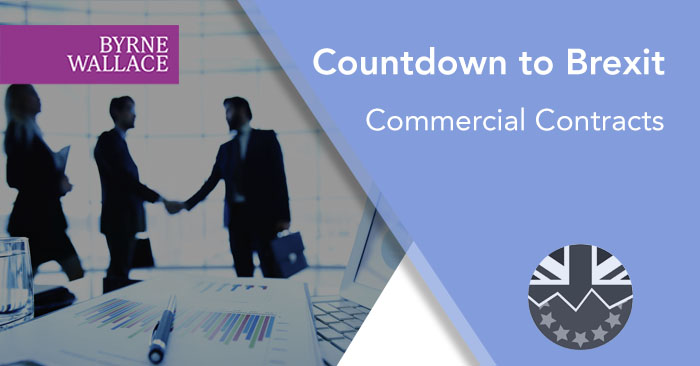 With the Brexit deadline fast approaching, the ByrneWallace Brexit team address various issues which will impact upon businesses either trading with or through the UK, or with suppliers in the UK, and/or with UK staff based in Ireland or staff in the UK.

In the third of our spotlight series, we address Commercial Contracts. Critical clauses in existing or commercial contracts under negotiation which businesses must consider:

Definitions: Does the contract mention or define the “EU”? Is the term defined to mean the European Union as it stands at the date of the agreement or as it might change from time to time? If the contract contains any Brexit-related trigger event or events, the term “Brexit” should be clearly defined for any change clause in the contract. Avoid language such as “when the UK ceases to be a member of the European Union” as it doesn’t address a scenario where the UK leaves the EU with transitional arrangements, i.e. some or all of the EU legal regime would continue to apply to the UK for a period after withdrawal.

Governing Law and Jurisdiction: Assess whether enforcement of an Irish judgment or an English/Scottish/Northern Irish judgment is expected to be more difficult and how this would impact your contract. Consider a choice of court or jurisdiction clause which designates an EU Member State post-Brexit, and also whether adding an arbitration clause, or other method of alternative dispute resolution, will be less likely to be open to challenge as a result of Brexit.

Assignment: Identify which agreements or classes of agreements need to be novated, amended or terminated. If either party opts to move its business into or out of the UK, or reorganise or restructure as a result of Brexit, will this result in contract transferring or automatic termination? This is especially relevant to regulated sectors.

Change Clauses - Frustration, Force Majeure or Material Adverse Change (MAC): Recent UK case law has shown how high the bar is for a party to invoke successfully Brexit as a means of frustration of a contract. Therefore, consider whether to identify any Brexit-related trigger event or events and define them clearly in any ‘change’ clause in the contract. Examples of trigger events are set out below.

Consequences of these trigger events will need to be considered, i.e. will the contract or any term in it be suspended, terminated or renegotiated? Is there an existing clause in the contract which deals with which party should bear the burden of such increases in costs and other changes to factors that the parties took into account when they made the deal?

For more information on the above or for general advice on this topic, please contact our Brexit Team.To register for ByrneWallace updates click here, and follow us on LinkedIn.