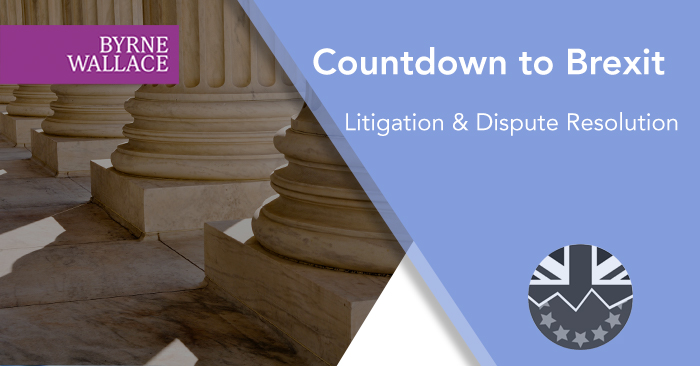 With the Brexit deadline passed and the end of the transition period fast approaching, the ByrneWallace Brexit team address various issues which will impact upon businesses either trading with or through the UK, or with suppliers in the UK, and/or with UK staff based in Ireland or staff in the UK.

In this issue, we address Litigation and Dispute Resolution.

Critical issues for businesses to consider:

Dublin as a Dispute Resolution Centre: Ireland is well positioned to benefit from the uncertainty created by Brexit and to become an international hub for dispute resolution. Post-Brexit, Ireland will be the largest common law jurisdiction in the European Union. Ireland will also be the only English speaking Member State. The common law is favoured by many international companies, particularly US companies, for cross-border corporate contracts. This provides Dublin with a significant opportunity to become the go to destination for the resolution of cross-border disputes. The Irish Commercial Court already provides the ideal fast track framework favoured for the resolution of disputes by international businesses.

A significant added advantage of litigating these disputes in Ireland, as opposed to in the UK post-Brexit, is that membership of the EU provides a legislative framework for the seamless issuing of proceedings and enforcement of judgments against other companies based within the EU.

The recognition of Ireland as a favourable jurisdiction for international dispute resolution has already commenced with the International Swaps and Derivatives Association (ISDA) introducing Irish law as an option for parties to its derivative documentation. In July 2018, the ISDA published an Irish law governed version of the ISDA Master Agreement. A key advantage of Irish law governed Master Agreements is that judgments relating to such agreements will retain the right to automatic recognition by other EU Member States. This provides certainty for parties involved in derivative transactions following the UK’s departure from the EU. The Irish law governed ISDA Master Agreement shows that industries are already preparing to use alternative jurisdictions for the resolution of disputes post-Brexit with Ireland clearly at the forefront of their planning.

Suing or being sued in the UK: Ireland’s membership of the European Union provides significant benefits for cross-border litigation including the recognition of judgments in other member states and the relative ease of serving proceedings in other EU member states. Post-Brexit, the UK will not be able to avail of these helpful EU regulations.

As such, the position regarding proceedings issued in the UK post-Brexit is uncertain. If the UK is not invited to agree to the Lugano Convention on jurisdiction and enforcement of judgements (which requires the support of EU member states to join) it will be more difficult to enforce a UK judgment in another jurisdiction in the EU. The UK’s invitation to agree to the Lugano Convention will depend on the final agreement on the terms of the UK’s exit from the EU, but until such time as that is clarified, it is likely to result in additional uncertainty in relation to the enforcement of a UK judgements in other member states post-Brexit.

Arbitration: London has been the dominant choice of seat for international arbitrations. According to a recent survey undertaken by Queen Mary University of London1, London was the most favoured arbitral seat securing a 45% share of the market. Factors such as (i) reputation and recognition of the arbitral seat (ii) law governing the substance of the dispute and (iii) particularities of the contract/type of dispute, contributed to London’s dominance in this area.

Ireland is also signatory to the New York, Geneva and Washington Conventions meaning that international arbitral awards will be recognised and enforced, save in certain instances such as where the arbitral award deals with issues not covered under the disputed contract3.

For more information on the above or for general advice on this topic, please contact Jon Legorburu, Mark O'Shaughnessy, Tanya Cotterell or Billy Casserly of our Litigation and Dispute Resolution team or Gerry Beausang of our Brexit Team.