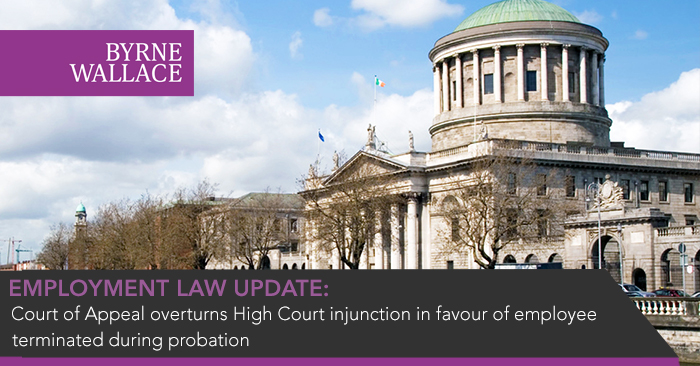 Judgement in the case of O’Donovan v Over-C Technology Limited and Over-C Limited [2021] IECA 37 was given in the Court of Appeal by Mr. Justice Costello on 16 February 2021.

The employee (Mr. O’Donovan) commenced employment as Chief Financial Officer in August 2019. He was notified in January 2020 that his employment was being terminated due to performance issues. In dismissing the employee with immediate effect, the employer relied on an express provision in the contract of employment that reserved the right to terminate the employment during the probationary period if performance was not up to the required standard. The employee was paid in lieu of one month’s notice.

The employee had attempted to appeal this decision but was deemed by his employer to have withdrawn the appeal when he notified the company that he could not attend the scheduled appeal hearing.

The employee initiated injunction proceedings in the High Court asserting that there had been a breach of his constitutional and implied contractual rights to fair procedures.

The High Court found that Mr. O’Donovan had established a strong case that he had an implied contractual right to fair procedures in the assessment of his performance during the probationary period. Mr. Justice Keane stated that affording an employee fair procedures was not limited to cases where the dismissal was by reason of alleged misconduct and that “the same obligation may apply to a ‘poor performance’ dismissal”.

The High Court considered that the employee had satisfied the requirement established in Maha Lingham v. Health Service Executive [2005] IESC 89 that he had a strong case that he was likely to succeed at trial and, in accordance with Merck Sharp & Dohme Corporation v. Clonmel Healthcare Limited [2019] IESC 65, that he was likely to obtain a permanent injunction at the trial of the action. That Court held that the employee had been dismissed for sub-standard performance during his probationary period without being afforded procedural fairness, including specifically the right to be heard as part of the assessment of his performance or to appeal against an adverse assessment. Accordingly, the Court granted an interlocutory injunction, reinstating the employee and requiring the employer to pay his salary for six months from the end of January 2020.

The Court of Appeal

On appeal, the Court of Appeal found that the employee’s argument that the right to fair procedures could be extended to a dismissal on grounds other than misconduct “fell very far short from establishing that he had made out a strong case in this regard”.

“In my judgment, the trial judge failed to give adequate weight to the fact that the termination occurred during the probationary period. That is a critical fact in this case. During a period of probation, both parties are – and must be – free to terminate the contract of employment for no reason, or simply because one party forms the view that the intended employment is, for whatever reason, not something with which they wish to continue. Neither party can hold the other to the continuation of the employment against the wishes of the other.”

In this case, the employee’s employment had terminated on 7 January 2020 but he only initiated the court proceedings on 29 January 2020. The Court of Appeal stated that “[h]ad he remained in place when he commenced the proceedings he might have obtained an order restraining the termination of his employment, if, for instance, he could show that his employment was about to be terminated for alleged misconduct without affording him fair procedures; but, once his contract was terminated he could not be reinstated to his former position in wrongful dismissal proceedings.”

A further factor which was detrimental to the employee’s case before the Court of Appeal was the fact that Mr. O’Donovan had accepted that the mutual trust and confidence, which is necessary between an employer and an employee, had been irretrievably lost. On this point, Mr Justice Costello commented:

The Court of Appeal noted that that the High Court judge had acknowledged that, in effect, the employee’s claim was one for damages for wrongful termination of his contract of employment and stated that damages were therefore an adequate remedy and because of this, no injunction should have been granted.

The appeal by the employer was therefore upheld. The Court of Appeal also found, provisionally, that the employer was entitled to an order for costs against the employee in respect of the both the appeal and the hearing in the High Court. Mr O’Donovan was given leave to appeal on the issue of costs within 14 days.

The Court of Appeal decision is reassuring for employers in dealing with probationary employees as it dispels uncertainly that had arisen following the High Court decision. Employers can take comfort from the Court’s clear statements that:

(1) at common law, “an employer can terminate employment for any reason or no reason, provided adequate notice is given. This applies whether or not the dismissal occurs during the probationary period” and

(2) “the principles of natural justice apply to cases involving dismissal for misconduct, but not to termination on other grounds”.

The decision does not prevent an employer from including a term in a contract which confers a right to fair procedures on an employee in the context of performance issues arising during a period of probation. However, in practice, most employers expressly exclude from the application of disciplinary procedures performance cases which arise during probationary periods. The judgment of the Court of Appeal reaffirms the value of a well drafted probationary clause in an employment contract.

While this judgment is welcome in terms of clarifying the risk of an injunction application arising from a probationary termination, employers should be mindful of other avenues of redress which are open to employees with short tenure. Employees who do not have the one year’s continuous service generally required to ground a claim under the Unfair Dismissals Acts 1977 - 2015 may consider making a complaint to the Workplace Relations Commission or to the Labour Court under the Industrial Relations Act, 1969. Recommendations issued under the Industrial Relations Act 1969 are consistently to the effect that fair procedures must be applied in cases of dismissal during a probationary period. While such Recommendations are not enforceable in law, they can give rise to industrial relations issues, particularly in unionised environments, while Labour Court Recommendations can also give rise to publicity as the names of the parties are not anonymised.