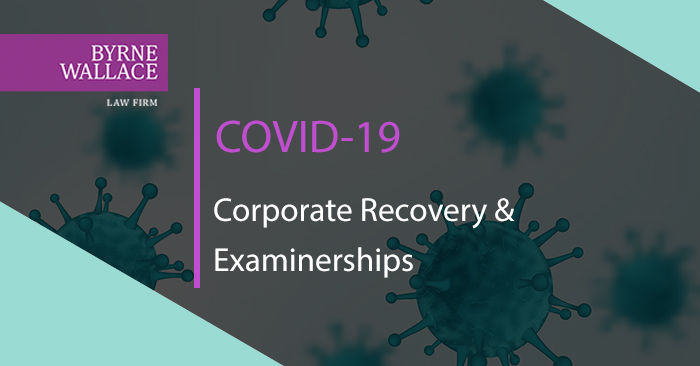 In our earlier article, we discussed the importance of timing in corporate recovery efforts and the difficulties facing companies with the examinership process and its legislative requirements. Against the backdrop of lobbying for legislative changes to certain insolvency provisions in the Companies Act 2014 (the “Act”) (including the examinership provisions), we take a closer look below at schemes of arrangement -  to date a much underutilised restructuring tool which can address many of the difficulties surrounding the complications and viability of the examinership process generally.

Examinership is a corporate rescue process which gives an insolvent company (or group of companies) protection from its creditors for a period of up to 100 days during which a company (through a court appointed examiner) secures investment and seeks to put a legally binding scheme of arrangement in place for the settlement of debts with its creditors.

While the examinership process aims to rescue companies as going concerns (with a particular emphasis on saving jobs), this may not be a viable option for many companies for the following reasons:

A Scheme of Arrangement under Chapter 1, Part 9 of the Act (“Scheme”) provides a statutory mechanism for a company to reach agreement with its shareholders and/or creditors in relation to the restructuring of its debt obligations. Such Schemes are different to schemes of arrangement proposed by an examiner under the examinership provisions of the Act. Unlike examinership, there is no automatic court protection pending the approval of a Scheme. While both involve court sanction and are binding on creditors, there are some fundamental differences between the two processes, which may make Schemes under Part 9 of the Act more appealing, for instance:

In order for a Scheme to be binding on all creditors and shareholders, the Act provides that:

In considering whether or not to sanction a Scheme under Part 9 of the Act, the court will consider a number of criteria which have been applied in previous cases involving the sanction of schemes. The company must be able to show that:

(a) Statutory requirements (such as reaching the required voting thresholds) under Part 9 of the Act have been complied with;
(b) Sufficient steps to locate and notify all interested parties have been taken;
(c) The classes of creditors voting on the Scheme have been properly constituted;
(d) There was no element of improper coercion or bad faith with respect to seeking approval of the Scheme; and
(e) The Scheme itself is one which an intelligent and honest person being a member of a class voting and acting in respect of its interests might reasonably approve.

If the above criteria can be satisfied, the court will be slow to differ from creditor/stakeholder wishes and will usually be happy to sanction the Scheme. While a court will not merely be a rubber stamp in this process, it recognises that creditors are the best judges of what is in their commercial interest when it comes to agreeing compromises or Schemes. Absent a challenge to the Scheme and approval process, reaching a binding compromise or agreement with creditors can be a very straightforward process. While the threshold for approving Schemes under Part 9 of the Act is considerably more onerous than in the examinership process, the devastating effects of COVID-19 on the economy will be felt globally. Such a backdrop can provide fertile ground for compromise and settlement which further highlights the benefits in taking early ownership of distressed situations. Early communication with stakeholders and creditors can give clear visibility on the feasibility of reaching an agreement or compromise, making for a smoother process with the hope of a fresh start.

Please note that the content of this summary does not amount to professional advice. Legal and tax advice should be sought in respect of specific queries. The COVID-19 situation is evolving rapidly and this update is provided on the basis of information available as at 21 April 2020.