VIEW ALL
Publications & Insights COVID-19: Tenancy disputes during a pandemic
Share This

COVID-19: Tenancy disputes during a pandemic 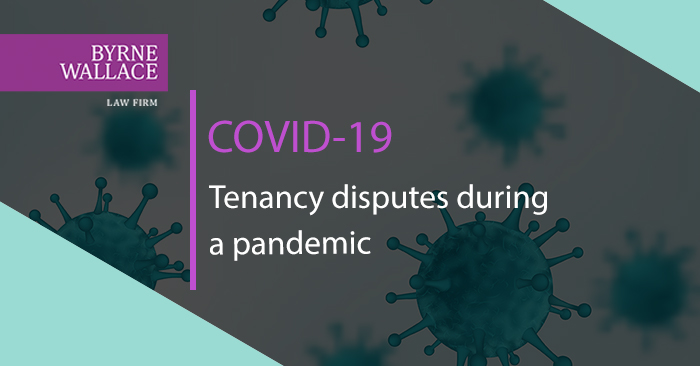 Two recent High Court judgments illustrate the approach that the Court takes to tenancy disputes during the Covid-19 pandemic.

In Oysters Shuckers Limited v Architecture Manufacture Support (EU) Limited and Wooi Heong Tan, a dispute arose between a landlord and tenant as to whether a new lease had been validly concluded, or if the tenant was overholding on foot of an expired lease. The tenant had not paid any rent since March 2020 and the landlord was seeking possession of the premises from which the tenant operated its restaurant.

At an earlier ex parte hearing (in the absence of the landlord) the judge granted an interim injunction. A significant factor in that decision was the fact that, under section 5(7) of the Emergency Measures in the Public Interest (Covid-19) Act 2020 (the “Covid-19 Act”), there was a prohibition on “all proposed evictions in all tenancies in the State”. When the matter came back to Court, this provision had been repealed. The judge noted that “the matter is to be decided according to the usual principles governing an interlocutory injunction”.

Mr Justice Mark Sanfrey stated that the existence of rent arrears does not automatically preclude the grant of an injunction. However, taken together with the tenant’s admitted inability to make future payments, the rent arrears weighed heavily when assessing whether the Court should exercise its discretion on the balance of convenience or justice. Landlords seeking rent from tenants whose premises have been closed due to COVID-19 restrictions will be reassured by the Court’s refusal to accept the tenant’s arguments that it was not obliged to pay rent during periods when its restaurant was closed due to the COVID-19 pandemic.

Noting that the premises had not been destroyed or damaged and that none of the insured risks applied to the circumstances, the judge dismissed the suggestion that rent should be suspended under the terms of the lease. The Court also rejected the tenant’s argument that rent suspension in the circumstances of the pandemic should be implied into the lease.

The Court concluded that the obligation to pay rent is a fundamental part of the contract and, so, there can be no defence of partial frustration.

In weighing up the balance of justice, the judge noted that the landlord was, in effect, being asked to subsidise or underwrite the future trading prospects and prosperity of the tenant, while being deprived of the use of its premises and the opportunity to attract another tenant. The Court dismissed the application for an interlocutory injunction and the interim injunction fell away.

Although the landlord re-entered the premises over two weeks prior to the publication of the Code of Conduct between Landlords and Tenants for Commercial Rents (see our earlier article), the tenant sought to rely on the landlord’s failure to follow the code as a factor in the application for relief against forfeiture. The judge noted that the tenant had not yet provided “any cogent financial information … to establish the extent of the impact [of the Covid-19 crisis] and hence, the applicability of the Code”.

The judge refused the tenant’s applications for possession of the premises and relief against forfeiture.

If you wish to discuss any of the issues raised in this article, please contact Michael Walsh, Michelle McVeigh or Aoife Hearne of our Property/Real Estate team, or your usual ByrneWallace contact.

Please note that the content of this summary does not amount to professional advice. Legal and tax advice should be sought in respect of specific queries. The COVID-19 situation is evolving rapidly and this update is provided on the basis of information available as at 4 December 2020.