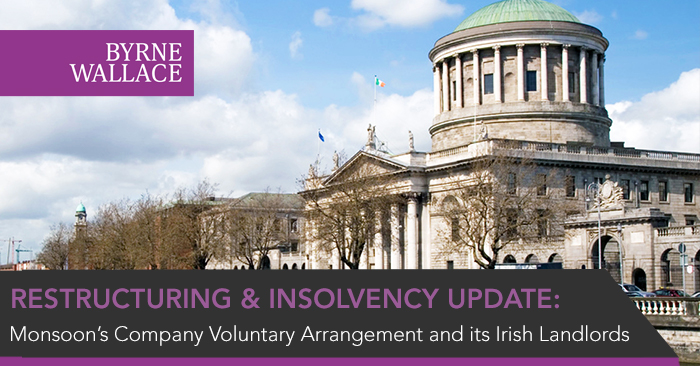 The decision is among the first judicial determinations on the effect a foreign insolvency process (here a Company Voluntary Arrangement (“CVA”) under the laws of England & Wales) can have on the terms of Irish law governed contracts dealing with immovable property, e.g. leases.

On 3 July 2019 Monsoon, which operated a large number of retail units throughout Ireland and the UK, implemented a CVA pursuant to English law under the English law Insolvency Acts and Rules. Voluntary arrangements under insolvency legislation (both individual and corporate) are insolvency proceedings capable of recognition for the purposes of the REIR. The terms of Monsoon's CVA sought to, among other things, modify the terms of many of its leases (including leases with respect to Irish properties) by including: (i) an entitlement to break the leases soon after the CVA came into effect; and (ii) a significant rent reduction in the amount of rent payable limiting Monsoon’s liability to the landlords and under a guarantee.

Monsoon, among other things, argued that under Article 326 of the REIR, judgments handed down by a court whose decisions concerning the opening of proceedings is recognised under Article 19 must also be recognised with no further formalities. Given that the decision taken by the meetings of creditors to approve the CVA constituted a judgment for the purposes of the REIR which concerned the course and closure of insolvency proceedings under the UK Insolvency Act, it was capable of recognition under Article 19 and well within the clear terms of Article 32(1). That being the case, it was argued, if the landlords wished to challenge the creditors’ meeting, they should have brought an appropriate challenge before the courts of England & Wales.

While Monsoon’s argument was accepted by the Court, it was argued that the CVA decision (being a “judgment”) was called into question due to the following factors:

(ii) Irish law would not have permitted the proposed modifications to the Property Contracts to take effect in the manner contended.

(iii) As the terms of CVA sought to interfere with the Irish landlords’ property rights, the fact that the Irish landlords were not afforded a meaningful opportunity to make representations as to the purported effect of the CVA in the course of the decision to approve it (i.e. at the creditors’ meeting at which the outcome of such meetings are frequently decided by proxies furnished to the chairman in advance of the vote with limited scope for discussion on contested issues) amounted to a lack of constitutional procedural fairness with respect to substantive property rights which were afforded protection under the Irish Constitution.

Essentially, the Court was persuaded that there were procedural issues with the “judgment” as handed down by the CVA procedure so as to invoke its power to refuse to recognise its terms as they related to the Irish leases on public policy grounds.

The Court concluded that, on the basis of the conflicting evidence of the experts as to English law, there was considerable uncertainty as to the ability of the Irish landlords to apply to the English courts to set aside the decision taken at the creditors’ meeting on the grounds that there had been a failure to apply Irish law to the question of the impact of the CVA on the Irish leases as mandated by Article 11. That led to a failure to give the Irish landlords an opportunity to be heard by the creditors’ meeting.

If that failure at the CVA approval stage was to be cured, a sufficient degree of assurance was needed that there was an effective route of challenge available to Irish landlords before the English courts to contest the outcome of the CVA process on the ground that there had been a failure to apply Irish law. On this question in particular there were opposing views in relation to the availability of a route of challenge and that suggested that there was considerable uncertainty as to the position under English law on this particular question. In those circumstances, the court could not see how an alleged existence of a right to challenge to the CVA could be said to cure the defect in fair procedures in the decision of the creditors to accept the CVA.

As a result, the Judge invoked the public policy exception to the rule on automatic recognition under Article 33 of the REIR.

In doing so, the Judge made clear that the public policy exception invoked in this instance was “solely” down to the procedure adopted in the CVA in this particular case and even at that he felt he was constrained to invoke it. By stressing this, it seems that the Court was mindful to respect the terms and the spirit of the Recast Regulation in terms of facilitating cross border processes, particularly with respect to the issues on automatic recognition (on which the Judge agreed with Monsoon’s arguments).

ByrneWallace acted for Monsoon in these proceedings.

5 In the case of a CVA, the creditors’ meeting is considered to be the “court” whose decision amounts to a judgment opening proceedings for the purposes of REIR.  For these purposes, the law of England and Wales was the governing law of the CVA process and its terms.

6 Which addresses the recognition and enforceability of “other judgments” meaning judgments other than those concerned with the opening of insolvency proceedings.