VIEW ALL
Publications & Insights More than just the price: Acquiring transactions
Share This 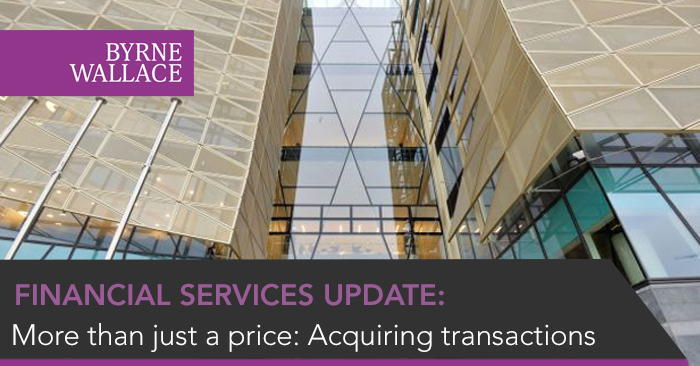 With 2020 set to herald another series of mergers, acquisitions, consolidations, and various other reorganisations in the Irish financial services sector, it’s an appropriate time to consider the rules which apply to significant changes in control or ownership in regulated financial firms. In Ireland, there are a number of what are loosely described as “acquiring transactions” regimes in place, and in this piece we consider the often similar, but sometimes divergent, provisions which have a major bearing in changes in ownership and control of firms across the financial sector.

Though sometimes overlooked by parties planning an acquisition, sale, or other significant reorganisation/change in holdings of a financial services provider, the acquiring transaction review and approval process should be an important consideration for all parties contemplating such a transaction, including the target firm. This is the case not only owing to the extensive information which may need to be provided to have the review initiated, but because the Central Bank of Ireland (“Central Bank”) may prevent the transaction taking place where it has sufficient justification for doing so.   Where the requirements are not met, the transaction may be deemed void as a matter of Irish law causing numerous complexities for the parties involved.

In terms of what they are, there is an acquiring transaction regime for each of the main classes of regulated financial services providers in Ireland (e.g. brokers, fund managers, etc.), with each regime having its own unique features. Generally, however, they require that any direct or indirect acquisition or disposal of twenty percent or more of the voting rights in a regulated firm are notified to the Central Bank by the seller, purchaser, and/or the firm itself. In addition an extensive list of details must also be provided, such as particulars of the purchaser, information on the nature of funding of the acquisition, etc. Where approval is granted, it may be accompanied with conditions; and where it is refused, typically any attempted transaction occurring thereafter will be deemed void as a matter of Irish law, and penalties may apply to the target firm and other associated parties.

The Central Bank, as a rule, seeks to be notified of proposed acquiring transactions – and bear in mind that less than a majority interest acquisition may be enough to trigger review obligations - through one of its Acquiring Transaction Notification Forms (each an “ATNF”). While the form will seek information on all key details of the proposed arrangement, those are frequently just the centre point of a voluminous information submission which may result in several rounds of interaction with the bank's officials through the acquiring transactions review and approval process.

The general overview detailed above is only a summary of the common features of acquiring transactions regimes and those interested in selling or buying a significant portion of a financial services provider in Ireland – or those managing a firm of that nature - should take care to understand the full nature of the individual regime which applies to that class of firm. Obligations range from as extensive as the sixteen regulations of the European Union (Capital Requirements) Regulations 2014, and associated provisions of the SSM Regulation1 for certain credit institutions, to the following requirement for AIF Management companies who are not authorised AIFMs:

“Approval of the Central Bank is required in respect of any proposed change in direct or indirect ownership or in qualifying holdings. A qualifying holding for the purpose of this condition is defined as a shareholding of 10 % or more of an AIF management company.2”

In terms of the types of financial services firms affected by acquiring transaction regimes, these include:

What is the nature of the Central Bank’s review and how long does it take?

Again, there are specific periods provided for in different acquiring transactions regimes with the standard period being 60 working days post-receipt of all relevant information on the proposed transaction. This is the period provided for in legislation applying to, insurers, investment firms, payment services firms, etc. Note that the Central Bank may request further information during the course of its review that may have the effect of pausing the assessment process until such time as relevant information is provided.

What do I need to know?

All parties involved in a potential acquiring transaction of any of the types of entity detailed above should be aware of the requirement for regulatory review and approval of the proposed transaction and factor it into their plans from the outset. The Central Bank’s review can delay even the best-laid plans, and its power to impose conditions on its approval may change the shape of a transaction. Failure to obtain approval may void the transaction - even where the change in ownership is elsewhere within a group structure and therefore indirect - as Irish law is a significant driver for seeking to ensure compliance, especially when it comes to undertaking follow-on transactions. That said, there are instances where transactions take place without securing approval - without any intention on the part of the persons involved. Here the law does provide, in certain circumstances, for the transaction to be reviewed, and approved, after the fact. However, that may not undo all negative effects and should only be contemplated where no other route is available.

How can ByrneWallace help?

ByrneWallace are experienced in helping purchasers, disposers, and the management of target firms navigate and comply with all aspects of the acquiring transactions regime. Whether it is a family brokerage firm or a multi-line insurer undergoing an internal restructure, our team of expert lawyers can provide assistance and support, including the completion of ATNFs, liaison with regulatory officials, etc. Acquiring transactions approvals can be a complex and lengthy undertaking for all involved and ByrneWallace is happy to lend its support in terms of securing the best outcome for all parties to a regulatory review of this nature.

For further information on our services in this area, please contact our Financial Services team.