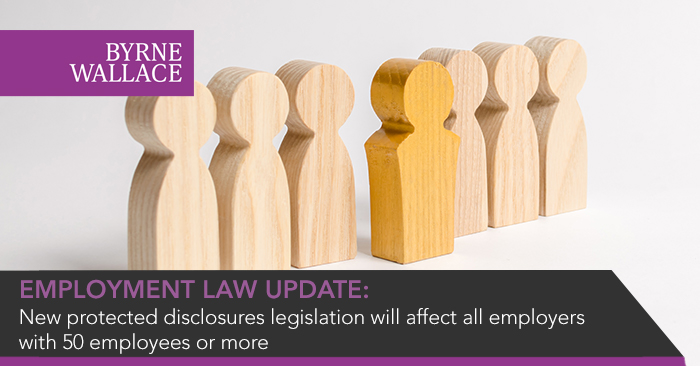 The general scheme for a proposed Protected Disclosures (Amendment) Bill 2021 was published on 12 May 2021 by the Minister for Public Expenditure and Reform, Michael McGrath TD. The Minister said that the proposed Bill “will further strengthen and enhance the protections for whistleblowers in Ireland – a key commitment made in the Programme for Government…”

A “general scheme” is a broad policy outline of proposed legislation. Detailed legislative proposals will follow in coming months.

The purpose of this Bill is to transpose EU Directive 2019/1937 (the “EU Whistleblowing Directive”) into Irish law. Transposition is due to be completed by 17 December 2021. Only 10 EU Member States, including Ireland, already have comprehensive legal protections for whistleblowers. The principal legislation in Ireland is the Protected Disclosures Act 2014 (the “Act of 2014”). The Government’s plan is to amend the Act of 2014 to give effect to the EU Whistleblowing Directive and to broaden the provisions of the protected disclosures regime.  New obligations will eventually apply to all employers with 50 employees or more.

Key provisions of the proposed legislation

The proposal would amend the definition of “relevant wrongdoing” (the types of wrongdoing that a person may disclose under the legislation). The amendments will:

The proposal would extend the scope of persons who are protected under the Act of 2014. The main focus of the legislation is to protect “workers”.  The proposals would extend the definition of a “worker” so that it includes other categories of people, including shareholders; volunteers or unpaid trainees; members of the administrative, management or supervisory body of an undertaking (e.g. board members); and those who acquire information during a recruitment or other pre-contractual process (e.g. job applicants).

The proposal would place an obligation on all private-sector organisations with 50 or more employees to establish formal channels and procedures for their employees to make protected disclosures. A derogation from this requirement will apply to undertakings that employ between 50 and 249 employees until 17 December 2023. After that date, the obligation will apply to undertakings that employ 50 or more people. All public sector organisations, regardless of size, are already required to have formal protected disclosures procedures in place under the Act of 2014.

Employers and prescribed persons (who are designated to receive protected disclosures under the Act) will be subject to an obligation to:

A Protected Disclosures Office will be established within the Office of the Ombudsman. This Office will:

The proposals will increase the range of remedies available to people who allege that they have been penalised for making a protected disclosure. “Interim relief” – i.e. the ability to get a temporary injunction from the Circuit Court before the full hearing of the claim – will be made available in all cases of alleged penalisation (at present it is only available in cases of dismissal).  Non-employees who have been penalised will be eligible to be awarded up to €13,000.

The Minister’s press release (though not the general scheme itself) indicated that the proposed legislation will reverse the burden of proof in civil cases. The press release said:

This would be a dramatic departure from the normal burden of proof in civil cases. Under many employment statutes a claimant must first make a prima facie case before the burden shifts to the employer to prove its innocence.  It remains to be seen whether the statement in the press release will be reflected in the final version of the legislation.

As an employer, what should I do?