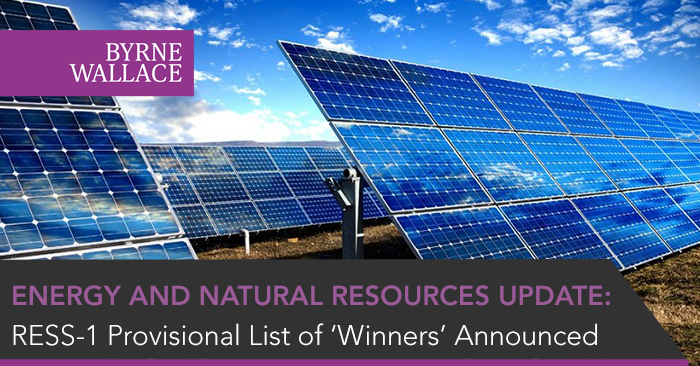 On Tuesday, 4 August, EirGrid published the provisional results of the first auction under the Renewable Electricity Support Scheme (“RESS”).

The provisional list of ‘winners’ includes 63 solar farms (comprising 796MW of capacity), and 19 onshore wind farms (comprising 479MW of capacity). All of these projects already hold planning permission and grid connection offers, meaning the Irish renewables industry is set for a significant ramp up in construction levels, which will most likely start to become evident early next year. The successful projects must be exporting power by 31 December 2023 in order to comply with the RESS Terms and Conditions.

The auction was split into three different pots or categories, namely: (i) Community (ii) Solar and (iii) All Projects. This ring-fenced category structure was designed so as to act as a safeguard for community projects and solar projects when faced with onshore wind farms that may have had a lower cost advantage when bidding into the auction.

Across the three categories, the average price for successful projects was €74.08/MWh. Given that many existing Irish onshore wind farms currently benefit from support of circa €80/MWh under the Renewable Energy Feed-In Tariff scheme (“REFIT” - the renewables support scheme that preceded RESS), the RESS provisional auction results vindicate having a competitive auction process in terms of reducing the impact on the final electricity consumer via the PSO levy.  Furthermore, the solar industry will undoubtedly point out to any of its sceptics from a price/value perspective, that this is very real evidence that solar is competitive with wind in Ireland and can deliver real value for consumers. Indeed, if the decision had been made to index link the bid prices for the duration of the RESS support, as is the case with REFIT support, some industry sources have estimated that in the region of €10/MWh might potentially have been shaved off the average bid price.

Industry eyes will now move to 10 September when the final results are due to be published. In the meantime, no doubt, the projects appearing in the provisional list will be looking firmly towards firming up on existing financing arrangements that were a pre-requisite to competing in the RESS-1 auction and proceeding with appointments of their teams of professional advisors and contractors.

Some unsuccessful projects may well already be considering the merits of waiting for a future RESS auction (should their respective project consents have the flexibility to facilitate that) or other route to market options e.g. corporate power purchase agreements. The announcement last Friday, 7 August of the CPPA between Facebook and Brookfield, which extends to some Irish renewable assets, is a reminder that RESS is not the only avenue for development stage renewable electricity projects.